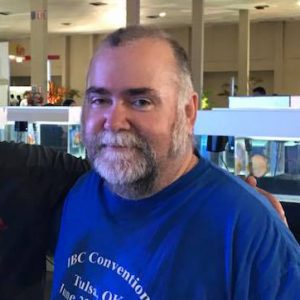 Gerald Griffin first started keeping fish at the age of nine and by ten bred my first fish species Colisa lalia, followed shortly by Colisa chuna (sota), Colisa fasciata and labiosa.  At the age of twelve he had read All About Bettas by Walt Maurus and fell in love with wild Bettas, the only problem was that in the 1970s he could not find any living in Oklahoma.  By the time he went to college he found articles on wild Bettas in the school library and joined the International Betta Congress and started corresponding with various fish keepers, found some wild Betta stocks and started collecting them and writing articles.

Around the year 2000 he once again got hit with the Betta bug and started keeping domestics. Soon after the wild Betta bug hit him and he went crazy collecting them.  He has run over 80 tanks dedicated to a number of different fish.  As he became more involved in his local fish club, the Oklahoma City Aquarium Association, he started keeping a variety of species and have since spawned various Barbs, African Cichlids, Killifish, Native American fish, American Cichlids, Livebearers, and a number of miscellaneous fishes. He has recently diverged into salt water fishes (clownfish and seahorses), but wild Bettas and Anabantoids will always be his first love and the primary fish he keeps.